As a CEO and Leader, I’m Starting with Myself and My Own Unconscious Biases

Alvin Toffler writes in Powershift, published in 1990, “What is immoral is a system that freezes the maldistribution of those resources that give power. It is doubly immoral when that maldistribution is based on race, gender, or other inborn traits.” Resources that give power include food security, education, healthcare, housing and safety, employment, and income. If we expect the systems to be different in the future, we must change today by implementing new policies, changing organizational practices, and learning how to spot institutional racism and systemic maldistribution.

Toffler Associates recently held a team discussion about George Floyd’s murder and the protests for justice. My colleagues were candid about their concerns and past experiences. There was open discussion about individuals’ confusion and questions about what is happening and how to make lasting change within our society and in its institutions. Rather than focus on solutions, we tried to ask the right questions – of our colleagues and ourselves. We gave each other space to explore uncomfortable topics, questions, and concerns, which resulted in some improved understanding of racism, discrimination, and inequality. It allowed me to learn new perspectives and identify some of my own unconscious biases.

It takes courage to participate in open, and sometimes controversial or difficult, dialogue with colleagues about racism and discrimination. I admire my colleagues’ courage and inquiry. Listening is the only way we will learn new perspectives and change as individuals, institutions, and society.

Being curious about our firm’s namesake’s insight into racial disparities, I’m struck how relevant his words are today from Powershift. Quoting from the chapter on Xenophobia, ”It is a combustible convergence of forces that could blow up in the face of democracies wherever they now exist. In its worst case, it conjures up the image of a racist or tribal, eco-fascist, theological state—a maximal recipe for the suppression of human rights, freedom of religion, and private property as well. Such a state seems hard to imagine—except, perhaps, as a result of some immense crisis and tragedy, an eco-spasm combining ecological upheaval with vast economic crises, terror, or war.”

The pandemic is an immense crisis and tragedy that is now converging with the legacy of racial inequality in the U.S. Are we at a tipping point with momentum to fix our challenges of income inequality, education and healthcare failures, food insecurities, criminal injustice, and safety and protection for all? 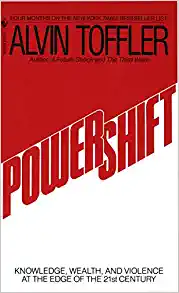 “For the first time, as we saw, it makes freedom of expression not just a political good but an economic necessity. But as the old industrial society enters its terminal tailspin, counterforces are created that could destroy both democracy and the option of economic advance.

To save both development and democracy, political systems need to leap to a new stage, as the economy itself is doing. Whether that enormous challenge can be met will decide whether the ultimate powershift that approaches will protect or enslave the individual.

In the Powershift Era ahead, the primary ideological struggle will no longer be between capitalist democracy and communist totalitarianism, but between 21st-century democracy and 19th-century darkness.”

As Alvin Toffler states, freedom of expression is not just a political good but an economic necessity.  The recent protests demonstrate the collective majority’s desire for change. Voices are not just coming from the streets, but also coming from police chiefs, city councils, chief executive officers, military leaders, and from all socioeconomic classes. Linking freedom of expression to economic advance is clear with the potential shift of consumer behavior stimulated by social media and the demassification of information.  Consumers and employees have shown their power with Nike, Adidas, SoulCycle, and CrossFit where the pressure was successful to change policy or strategy. We need this powerful shift of the people to evoke systemic change in our institutions.

As leaders, we need to acknowledge how we have been blind and ignorant, and where our unconscious biases have influenced our decisions. If we seek to listen, learn, and act, together we can finally evolve to the 21st-century democracy that humanity needs and demands.

Get The latest Toffler Insights & News